so it seemed only fitting that I should make a cake to match the theme for the post-performance party.

They didn’t realize the surprise that was in store for them once it was cut.

The first task was to make a candy glass prism.

It’s possible to make candy glass using table sugar, but sugar caramelizes at a lower temperature than the one necessary to make the glass, so it has a slightly golden hue rather than being crystal clear.  For the bright, vivid colors of a rainbow encased in a clear prism, using isomalt was the answer.

Thankfully, once it’s initially made, isomalt glass can be reheated several times for reuse, so I made a single batch of it and tinted small amounts in rainbow colors, using Americolor gel colorings.

A lovely array of rainbow-colored isomalt.

I had made molds using matboard (the kind used in framing pictures), rolled teflon, and teflon mouse tape.  The molds consisted of two triangular faces for the prism, three rectangular sides, and multiple slats that could be added or removed sequentially to create the stripes of the internal and external rainbows.

I heated up each color and poured, then moved on to the next when it has solidified enough.

After pouring all six colors, it was clear to see that they were really separate segments stuck together, but I was able to smooth them out with careful use of a culinary blowtorch, a flat block of wood (protected by teflon, of course), and a weight.

I assembled the prism by melting the edges with a combination of a culinary blowtorch and using the surface of a cast iron griddle.  It’s delicate, fussy, and somewhat dangerous work (I only got one small sugar burn on a finger), but worth it.  One of the sides was broken during assembly, but I decided we could do without the bottom. 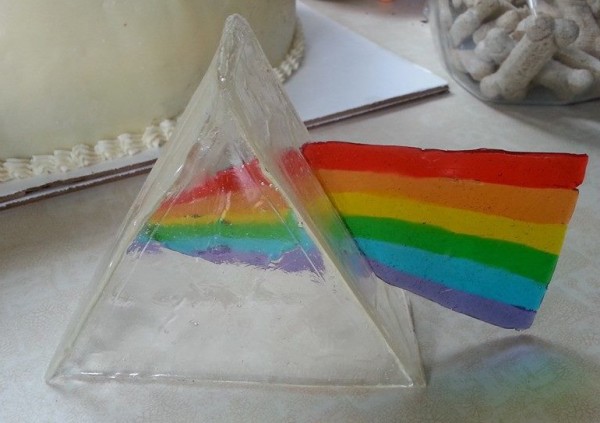 Initially I thought I would make all of the layers from scratch, but the baking aisle at the supermarket tempted me with six perfectly colored cake mixes for a dollar apiece, so they came home with me.  Each mix made a single 8″ layer, and I torted them to approximately 1/3 of their original size (the rest go into the freezer, because surely there will be a future need for rainbow cake?).

I filled between the layers with Italian meringue buttercream, plus a hidden layer of blackberry jam between the blue and violet tiers…since some people feel that dropping indigo from the spectrum is not acceptable. 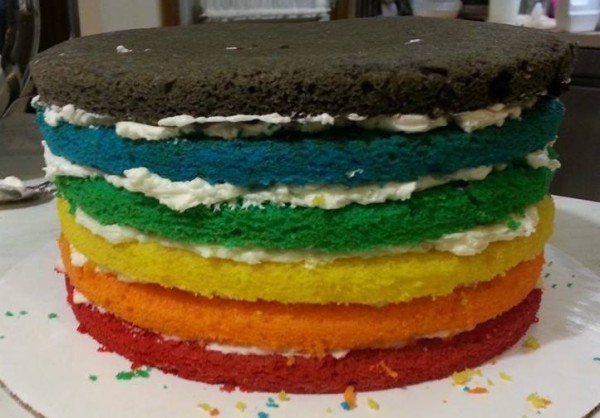 I iced the outside with the same buttercream, hastily added ridges to the sides, and piped a border.  The candy glass topper was added immediately before serving, so that the moisture from the icing wouldn’t damage it. 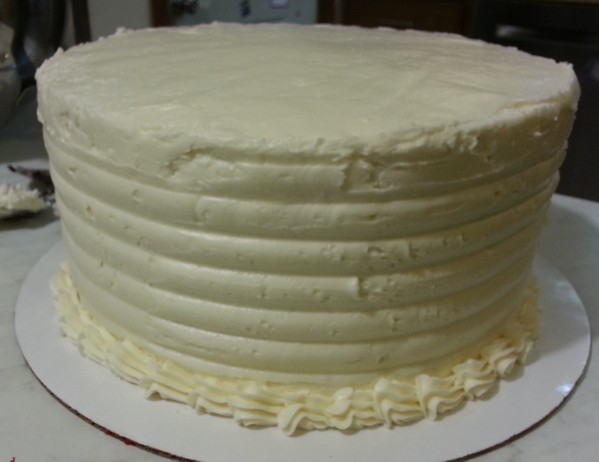 Voila!  Rainbow Prism Cake to wow the geeky masses (and wow them it did).

Any actual sense is an unintentional lapse.